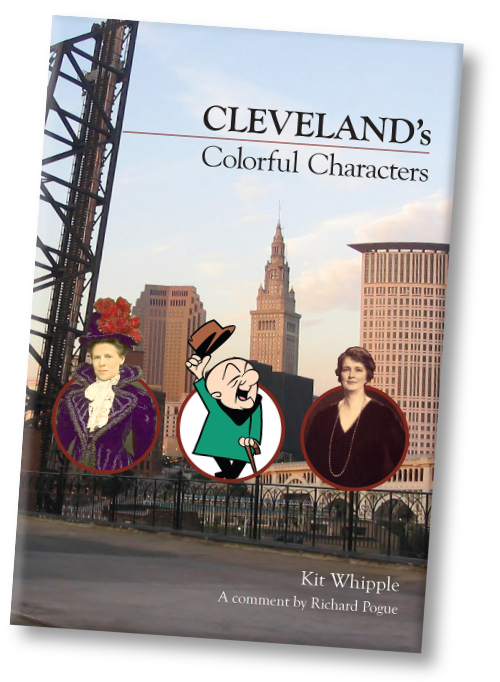 Being from an old Cleveland family, Kit Whipple like so many other Clevelanders, is fiercely proud of Northeast Ohio. In hopes of assisting other Clevelanders in understanding what makes Cleveland so uniquely special he has recently released his book Cleveland’s Colorful Characters.

“Cleveland’s Colorful Characters” is an easy to read, insightful book on some of Cleveland’s most influential individuals. These individuals helped create the grand and unique city which at one time was one of the most respected cities in the world. The first chapter is on the Mather family and how they helped create many of Cleveland’s world class institutions. On a lighter side they were the first documented individuals to throw a ‘toga party’.

The 2nd chapter provides insights into the Van Sweringens who built many of Cleveland’s finest homes and buildings as well as being the largest railroad owners in the country. Through the author’s research he was able to determine they were the basis for the book, The Great Gatsby.

The other chapters share inform readers on Charles Schweinfurth, AKA “Cleveland’s Castle Creator”, a brief insight into Camp Cleveland a 20,000 person Civil War camp in University Heights, unusual ghost stories and the last three chapters are dedicated to Cleveland’s automotive history. This is when Cleveland was the car capital of the country, if not the world.

Much of the intriguing information in this fact-packed book is new information which the author derived from his in-depth research and conversations with family descendants of those depicted in the book.

Here is a short video on the book along with a link if you are interested in purchasing Cleveland’s Colorful Characters.

Please watch the video below for a recent interview by Joe Cronauer of Channel 3 NBC (WKYC) concerning the Cleveland’s Colorful Characters book. NBC was kind enough to allow me to talk for a few minutes on Mr. Magoo and on the Van Sweringens being the basis for the book, The Great Gatsby. A newly discovered train car with the name Gadsby Kitchen is shown during the segment. This Lionel train car is modeled after an actual railroad car owned by the Chesapeake and Ohio railroad. The C&O railroad was owned by the Van Sweringens. This provides further evidence of the Vans being the basis for F. Scott Fitzgerald’s book. Much more information is contained in my book on this topic as well as other interesting information on a few other national notables. Hope this segment and the book are enjoyed.